After a week in the hospital, it was wonderful to have a normal day.  Everyone slept in, Christa and I each got out for a run, and we all just enjoyed getting going slowly this morning.  Henri and I had planned on making a trip to Meijer (our local grocery/everything store) and when she heard we were going, Chloe wanted to join us.  While there was no medical reason why she couldn't come along, it still felt a little risky to take her out of the house.  In the end, I knew that the sooner we returned to normal life, the better.  So, Chloe came along and did great.  She did get tired about half way through the trip and asked to ride, rather than walk (something she never does).

After lunch, Chloe took a long nap which allowed me to make a handful of phone calls regarding insurance and other items that have come up over the past week.  Christa was able to get out for a haircut and a few errands.  Later on in the afternoon, I was able to join a friend for a beer and tonight Christa is out with some friends.  We're living a normal life.

If it wasn't for the fact that Chloe was up around 3:00am and threw up a little (a side effect of the chemo) and my added stress while making breakfast for the kids while also trying to figure out which meds Chloe needed, you wouldn't guess that we have a kid with cancer. 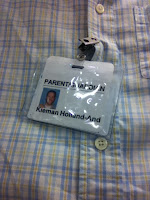 While chatting with my friend Brett this afternoon, he asked me if I ever felt like I wanted others around me to know that Chloe has cancer, to know that our world as a family had just been turned upside down.  To be honest, I totally do.  While walking though Meijer I kept thinking about the people shopping around us, wondering what they would think if I told them that Chloe had cancer.  At the hospital this past week, we were required to wear IDs that identified us as parents.  I'll admit that my ID became such a part of me that I wore it outside the hospital as well.  While picking up lunch at Marie Cartib's yesterday, the cashier stared at it for a while as if he were trying to figure out why I would need to be identified as a parent.  I wanted to say, "My daughter is at the DeVos Children's Hospital.  She has cancer."  But I didn't say it.

After the crazy and intense week we've had, today was such a blessing.  I know they won't all be like this.  It sounds like the side effects of the chemo will sort of cycle and we'll have good weeks and bad weeks.  I've always worked to live in the present moment (with marginal success).  Now it seems it is going to be even more important to do that, to take each day as it comes and enjoy it as much as we can.
Posted by Unknown at 10:44 PM
Email ThisBlogThis!Share to TwitterShare to FacebookShare to Pinterest

"To take each moment, and live each moment"...means a lot, in a normal day and those that are not so normal. Sending thoughts and prayers to your family, and especially Chloe.

hi, sorry to hear about Chloe! I'm thinking you may have to screen guests....... Sarah says we can do piano lessons at their house next week if need be. I'll check with you if being "normal" works next week. God Bless the process. --June v f