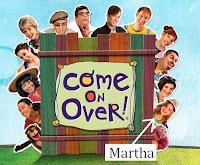 [We interrupt our usual topic of conversation to bring you this news about another member of our family who is pursuing her passion for acting.]

Last spring, Martha had the opportunity to audition for a role in the locally-produced show, Come On Over!  She got the part and was able to spend the better part of a week (and missed school!) filming shorts for the show called "Ceci Wonders" playing the part of Ceci and Josh's daughter, Martha.  Two of the six DVDs, Groovy! and Blast Off! are hot of the presses, with the others to follow in the coming months.  It's my understanding that there is at least one short containing Martha in each of the DVDs, as I believe she shot a total of ten (the events of the summer have messed with my memory capabilities).

COO! is the product of the imagination and talent of our friend, neighbor, and follow Third Church member, Joel Schoon-Tanis.  Please join us in supporting COO! by buying a DVD or two (or four or six!) and downloading a few songs from iTunes.  COO! is geared towards 3-8 year olds, but all ages would love it!

How cool was that!  Obviously we're super-proud of her and the work that she is doing!  (We're super-proud of Joel and rest of the cast and crew, too!)  You can see more videos (be sure to check out God is Green) at the Come On Over! Facebook page.

Come On Over! Live Show

If you happen to live in West Michigan, you're not going to want to miss the COO! Live Show with musical guest Jars of Clay on November 5th @ 10am.  Martha will be on stage with the cast in some small capacity and will even be jammin' with the band on I Love My Triangle playing, yes, the triangle.  We hope to see you there!
Posted by Unknown at 8:50 PM
Email ThisBlogThis!Share to TwitterShare to FacebookShare to Pinterest